Feel free to rant and rave in here, but please no slander or offensive remarks !

Another game I picked up is the Mega Man Zero/ZX collection. I've only played the first MM Zero game on the GBA many years ago. I have played through the first Zero game last week and it's one of the hardest MM games I've ever played. It's crazy how difficult parts of it is. I did beat and outside of the level selection and that you have to upgrade your weapons I enjoyed it quite a bit. I moved on to part 2 and it's better in every way possible, from animation to sprites, to level design and boss battles. I can't wait to get to 3 which is supposed to be the best in the series. I have beat 2 but going back in to try get rank A on every level so I can unlock special "forms". It's an odd system but something I wanted to attempt even though it doesn't do much outside of being able to equip an extra move (some that are useless).

By inksb -  Tue Mar 10, 2020 1:42 pm
-  Tue Mar 10, 2020 1:42 pm #126178
I started playing Vanquish last night at the recommendation of a friend and holy hell is it a fast paced fun 3rd person shooter (and I don't generally like shooters). It poses itself as a cover shooter (like Gears of War) but it's not at all, you have this amazing 'boost' mechanic where you slide across the floor with rockets on your legs, the combat is designed for you to move fast and shoot the entire time, dropping in and out of a slow down time mode and taking cover only when you need a slight breather. Created by Platinum Games who are responsible for Bayonetta series, Wondrful 101 and Astral Chain, so you know has way more depth to the combat than the game actually introduces to you. I watched a few videos of "advanced techniques" on youtube and I'm blown away with what people discover in games. It's crazy.

Jimmy_Mike wrote: ↑Tue Mar 10, 2020 3:25 pm I started God of War a couple weeks ago. It's good fun. I like the button mash style fighting and 1917 camera work. The haptic feedback on the axe throwing is next level.

That game was so much better than I thought it could be. GoW series has always been a mindless button mashing extravaganza but with this one they managed to refine the combat and make it much more precision based. I loved the axe, it feels so good to wield and even as you unlock more stuff I always came back to the starting weapon. I have minor complaints about some story beats and a few small sections of the game but overall I loved it. And just a heads up, once you finish the game you get a credit sequence, make sure you play the small section after that as you get a very cool bonus cut scene.

By inksb -  Thu Apr 09, 2020 1:34 pm
-  Thu Apr 09, 2020 1:34 pm #127125
I've been replaying Bloodborne with a friend and my brother. It's been a hell of a lot of fun. I forgot so much of the game it's been so long. It's definitely my favorite From Soft game. From the lore to world design to combat, it's all fantastic. My only real gripe is that it's locked to 30fps and it dips frames every now and then. If they ported it to PC I'd replay it all over again in 60fps. Last night I beat Orphan of Kos (the DLC main boss), then helped my brother and friend beat him which neither of them have ever done before so that was fun. I'm at the end game and really only need to go fight the final boss to be done but there are lots of chalice dungeons that still need to be finished so I plan on doing that for a while before I call it quits.

The Mrs. wanted to play some Overcooked 2 this weekend and I told her I didn't want the stress (it's an incredibly stressful game) so I suggested we play Until Dawn. For those that don't know it's an interactive horror movie done through video game. Written by Larry Fessenden and Graham Reznick. We had started it a few years ago but never finished so we started all over again.
Its going to be fun. I'm letting her do all the controlling of the characters and we go over the choices together. She does hand the controller off during the quick time events as she doesn't play the PS4 enough to remember what buttons are where with out looking down at the controller.

I had some paypal cash sitting in my account two weeks ago and I picked up the new and incredibly popular thing to play, Animal Crossing New Horizons. It's a hell of a lot of fun and relaxing to just waste a few hours harvesting, crafting and selling. I finally unlocked an additional room for my house and converted it to a record room. Added in some custom designs to flesh out the wall. These will change but I was just in a Tiger Lab Vinyl kind of mood when I did it. 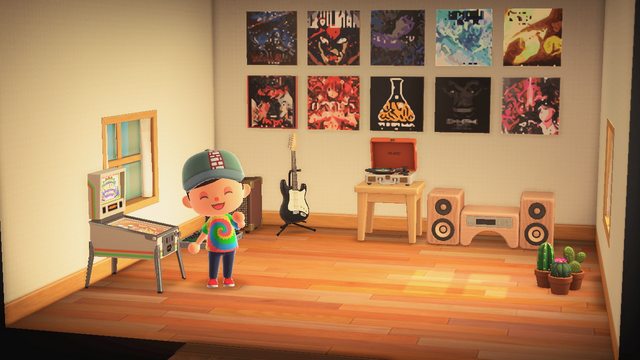 This weekend Final Fantasy 7 Remake comes out and I need to venture out of my house and go to my empty office to download the 100gb file to play it. I can't wait but know it's going to take hours to download :(

I am currently about half way through Final Fantasy VII Remake and absolutely loving it. I've heard lots of folks are unhappy with the ending so I'm really curious to see what I think about it. I've managed to avoid all spoilers. The combat is excellent, characters are great, the expansion on some of the lesser characters like Jessie has been fantastic. I love Tifa and Aerith, Barret is hilarious. Cloud is kind of perfect, and slowly opening up more to the people around him. It's really nicely done.

I picked up Streets of Rage 4 and can't wait to give that a go when ever it finishes downloading.

The case doesn't arrive until tomorrow but went ahead and unboxed this monitor and tested it out with my switch. Holy shit, tech has advanced a lot!! I thought this would be too much screen. No way, it's perfect, I have joined team ultrawide 21:9. I am especially stoked to get more productivity space for work. I've been slogging with a single screen and doing lots of alt tab toggling.

The GPU it takes to push this many pixels this fast is as big and heavy as a brick and takes up three full card slots! I remember when I thought the 8800GT was absolutely massive.

So, as my wife would say, "NERD MOBILE!"

texasvinyl wrote: ↑Sun Aug 09, 2020 9:08 pm Went with the Ryzen 3700x chip. I work much more than I game and it seems more well rounded. The cooler it came with runs a lot for general use. I'm downloading a game and it keeps revving up sporadically.

You should keep an eye on the temp of the CPU. I don't ever use stock cooling fans they don't do a very good job at regulating temp outside of normal basic PC tasks. I actually use a Corsair liquid cooling system in mine. Corsair Cooling

My favorites so far are Forza 4 Horizon and Doom Eternal. Forza is pure eye candy, and doom lives up to the hype. It's insane. Just about every room I clear would have seemed impossible five minutes before. I found something called a Slayer gate challenge, and holy shit was it hard. But somehow I won. The game makes you feel like an unstoppable force.

I am a grown ass man, but these two games brought some literal jaw dropped, shit eating grin, laugh out loud moments like I was 12.

Put some more lights in the nerd mobile

monsterworship wrote: ↑Thu Aug 27, 2020 12:55 pm Really excited for next week the revised Tony Hawk Pro Skater comes out! though i have zero time to play at the moment.

I have been playing the warehouse demo on PC, feels like restoring old synapse connections again. Good times.


tony hawk is great, same as the originals but revised graphics. i also still suck at video games.

I've been really enjoying Control a lot. It actually didn't take a year to get ported to the PC. It launched on PC at the same time as the console versions, it was just an Epic Game Store exclusive. So a year later it finally launched on Steam. And boy oh boy does this game not run great on my 1070. I have to turn down everything to medium or low to get it to run at a steady 60 and even then certain sections drop my frame rate.

I ended up picking this up too as I had a coupon to use on the Epic Game store. Like you said, it's the same as the originals, looks way prettier, has a much faster frame rate. I have 100% THPS and played the first two levels of THPS2 but honestly it just kind of makes me want to play Skater XL instead. I really love the more realistic approach. I spend 20 minutes just trying to land a line. It may sound boring to some but I love that. It feels so good to land it, then you take the camera and make a nice little skate vid clip. All the community maps and stat mod on PC make it a fantastic game, although I'd probably hold off on consoles as it only has 5 maps total and no mod support.


I'm very excited about Mario 3D All Stars on Friday. It's been years since I've revisited Mario 64 or Galaxy and I've never played Sunshine.

I can't believe how good the prices are on the 3070 and 3080's. I am most likely going to grab a 3070 in a few months. I'm waiting see how the launch of the PS5 goes. I already have that money set aside but if there is nothing that I want on launch then I think I'll just upgrade my card at that point.

Reply
Return to “THE WATER COOLER”